“Volunteering and tourism are two words that should never meet” 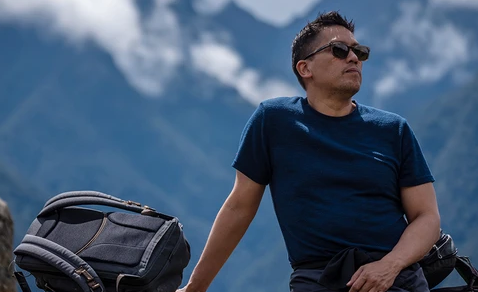 ∞This story originally appeared in the Vancouver Sun on June 13, 2022.∞

When the last tourist leaves, what is left for the locals?

That’s the central question of the new documentary The Last Tourist, which explores the profound impact decades of mass tourism have had on our earth.

The Last Tourist, which was completed and ready to be launched January 2020 when the pandemic hit, takes a look at the impact of tourism on the host community’s natural environment, wildlife, and wellbeing of the people.

The message will sound familiar from those in the ethical food movement: travel, but slow travel: research and travel mindfully, lightly on the earth, and in moderation.
After a screening at the Vancouver Film Centre in April, during question period, David Suzuki spoke up from the audience, exasperation in his voice, and said what many are left thinking after the credits roll: surely someone can do something?

Poon Tip wasn’t having it.

“People have to change,” he told the audience. “There is so much pressure on operators. But it’s your responsibility to create the demand. Travel is a privilege not a right.”
The answers aren’t easy. Commercial travel needs an overhaul. Consumers need to apply economic pressure to tourism providers and change their behaviours. Instead of tourists seeking undiscovered locations, we need to become travellers who seek ethical destinations.

Here’s what the veteran traveller and CEO had to say about how to choose vacations in line with your values, why “voluntourism” trips are part of the problem, and how the pandemic has prompted people to reassess the way we travel.

Is it still possible to travel ethically?

Yes, of course. It depends on how you define ethically. You have to just find the (ethical) destinations, if you care enough, because the vast majority of travellers do not. That is why there’s this unconscious buying of compound resorts where people don’t have really have the full experience of travelling, they’re in a compound with all the comforts of home. If people really want to travel ethically, they should be connected to where they are going. They should be purposeful about why they want to travel, and then it is meaningful to them. Now is the perfect time that we can reevaluate and travel better.

How do you define sustainable, ethical travel?

There are three pillars which are important to (local) people. Travellers have to decide what is important to them when it comes to sustainability. The first one is climate change: if that’s your thing make decisions based on that. The second is poverty alleviation and wealth redistribution: the idea that you being there has a positive impact on local peoples. And the next is cultural heritage preservation: the preservation of cultures and some of our most pristine and beautiful and iconic destinations for future generations.

If you want all those things in one package, that’s where we sit, on the extreme end. But if animal welfare is more important to some people or human rights… well, there is an NGOs tied to everyone’s values. I think people should also consume all products, including travel, to match their values: that’s the future of consuming.

We can make personal choices, but what can the industry do on the supply side, or structurally to make travel more sustainable?

There has got to be more cross-pollination between industries within tourism, better communication, and travel organizations that are not guided by political means. You need associations, you need regulations, but it has to be independent. We as an industry are good at regulation in some areas, for instance in Antarctica where all (tour providers) are also part of an association run externally. I think the travel industry needs more of that: working closer together but being run by independent organizations.

What was the impact of the pandemic on G Adventures’ 1500 local tour leaders and Planeterra projects?

We did what we could in the early stages assisting our CEOS (local tour leaders). Government programs kicked in and we assisted where we could. Some countries had good programs, some countries had none…I would say that it was a mess. We did as much as we could during the escalation, but at the beginning of this pandemic we thought it would last a month or two months… two years later we’re just starting to get people back to work.

We’ve been in survival mode as an organization ourselves. The Planeterra (community tourism non-profit) projects, we raised quite a bit of money for those communities and I matched donations on numerous campaigns — our customers were amazing. We were able to give assistance to some, but not all who needed it.

The part of the film I found shocking were the orphanage volunteering scams where touring volunteers think they are doing good, when in fact, demand leads to the creation of more orphanages, tearing the fabric of local communities. How can we prevent this?

Voluntourism: volunteering and tourism aren’t two words that should ever meet. You shouldn’t think about going on holiday to volunteer. I know it’s all good intentions, I do believe humans are good by nature. But it can’t be scheduled, it can’t be merchandised and it can’t be marketed and at the same time be meaningful. I’ve just never seen it done. There are ways to volunteer and you should, but how you do it is connected to meaningful work, rather than a tour operator who is scheduling volunteer holidays on a mass scale… I’ve seen, across Latin America, churches painted seven times a year by volunteers.

How did the pandemic change your own outlook and practices on travel?

I didn’t travel for 18 months. For someone who travels an average of 300,000 miles a year to not travel for almost two years was a shock: to my system, to my lifestyle, to my sense of being! To be forced to do everything remote was a real challenge.

How are you seeing other travellers reassess travel habits now?

I think for the first time, people are more open to anything. It’s your privilege to travel, not your right, but just prior to the pandemic the mentality was, “I paid for this trip, it promised these services, you will deliver or I will complain or sue you.” So tourism was a one way experience. We’re seeing people more open to change, to doing things differently and itineraries being more flexible, and in general we are seeing people more connected to the destinations.

Travel has got to be more important to you than ever before if you are going to do it. If you want to do it, it has to be meaningful and purposeful. And that is exactly what we need in the travel industry.

The Last Tourist is available to watch on digital and on demand. Learn more at https://thelasttouristfilm.com.

The interview has been edited and condensed for length and clarity.

I’m a different kind of travel writer. I craft long-form, cover-worthy feature-length travel articles with style and substance. I tell travellers not just what to do, but why. Find out how to work with me.

I’m a different kind of travel writer. I craft long-form, cover-worthy feature-length travel articles with style and substance. I tell travellers not just what to do, but why. Find out how to work with me.